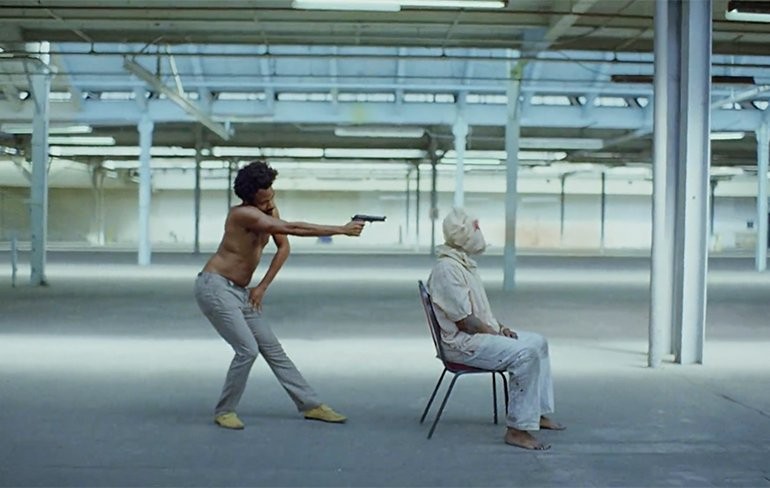 In the PROUD music video, 2 Chainz, YG, and Offset recruit their own mothers and they steal the show! The 2 Chainz directed video is full of joy and love as the rappers and their mothers dance and rap the lyrics together. The hook of the song says “I just wanna make my momma proud / My momma ain’t raise no ho”, so rightfully they had to get in on the fun. My favorite part about this video is the fact that each mother correlates to their son. 2 Chainz’ mom is wearing jewels, a headband, and circular glasses while YG’s mom is dressed in all red with a red bandanna tied around her neck. Offset’s mom is doing work in the trap house which Offset rapped about 100 times throughout his songs.

The creative minds of Rocky and Moby put together results in this video. With slick camera skills and high-tech computer work, A$AP Forever is full of tricky patterns and special effects. For the first half, the camera zooms out of one screen and turns it into an object (poster, tv, book) which appears in the background of the next screen. Once the lyrical part of the song ends, the visuals take turn. It’s a little tricky to explain in writing so my best advice would be to watch it.

Honestly, this was awesome! If you are a fan of the cartoon show Ed Edd n Eddy, than this video is definitely for you. J.I.D assumingely takes over as Double D and goes on about his day in the neighborhood. He spends his day getting high, paying back his dealer, and running into the cops as the video follows the lyrics to the song.

This video was next level. If you ever used Google Maps and clicked on satellite, you could see pretty much everything on Earth frozen in time. Well with some innovative directing and prominent editing skills, this video turned into a Google Map. You can see the camera zoom in and out and head up and down the street; just like it does on the computer. At some points the camera freezes to see Vince rap or catch the action that occurs in the street.

Not only did God’s Plan go instantly viral as a song, but the video did as well. The story behind this video is that Drake chose to do good with the video budget and give it back to those in need. The whole video is pretty much Drake walking around Miami doing good deeds and surprising people left and right. In one part he announces that he will  buy everyones groceries in the store. At another retail store you can hear him say “you guys can get what ever you want.” My favorite part is when he pulls up to a high school and everyone loses their mind. Also a little cameo from the Miami native Antonio Brown doesn’t do any harm. All in all, it was very down to Earth which makes it so great.

This video still gives me chills…. After the death of X, this video was released and it reflects a melancholy tone. To begin with, it starts off at his own funeral (right after his death) and with his new blue hair, he walks up to a casket to see a deceased body of his old self (with half blond dreads). From there it cuts into a scene where he is being told by a black hooded “spirit” to spread love and good energy from now on. When it cuts back to the funeral, the old body pops out of the casket and begins to fight X. As X goes on to fight himself, the representation of the video becomes apparent. He is literally battling through his old ways to become a better person. Unfortunately, we never got to see the person he was ready to be. LLJ

Honestly, Lil Dicky outdoes himself every single time. From Save That Money to Pillow Talking Dicky adds another gem to his collection. The video is based on the movie Freaky Friday  where the mother and daughter characters switch bodies and have to make ends meet to return back into themselves. In this video, Dicky is fed up with not getting love and switches bodies with Chris Brown. The whole song and video is about Dicky questioning the things he can do as a superstar like Chris Brown. As usual, it is full of comedic references and hilarious cut scenes.

Honestly, this was one of the most iconic music videos ever. J. Cole made a song titled Kevin’s Heart which was pretty much about making a mistake while being in a committed relationship. In 2017, Kevin Heart openly admitted to cheating on his pregnant wife at the time and knew the consequences he had to suffer. The song states “Told myself I’m strong enough to shake it and I’m trying / But I’m only human, I know loving you’s a crime /If I take this cookie now one day I’ll do the time”. J. Cole gets Kevin Heart to play himself in the music video. As Kevin ventures throughout his day, we see many reactions from all types of people. Some look at him in disgust, while others take their shot with “the cheater”. The song and video go perfectly together which makes it so special.

If any part of you though that Beyonce and Jay Z weren’t the biggest power couple, this video just proves where they stand. First off the music video it’s self is great. The cinematic and choreography is unmatched and about as good as it gets. But the setting is what really makes this video CRAZY. If you are unfamiliar with the setting, it takes place in the Louvre Museum in Paris. If that still doesn’t ring a bell, just know it is to the home of the Mona Lisa. That being said, the amount of money, clout, and power it takes to close this place down for a music video is UNREAL. This place has probably never been closed down and if it did, it was not for a damn music video. But I guess Bey and Jay add a new piece of art into the museum.

1. Childish Gambino – This is America

This one was probably high on everyones list but it absolutely deserves to be. This video is so powerful and comes with so many messages. From politics, to media, to inequality, this video covers it all. Childish Gambino uses a variety of pop culture references that tie in to the message behind the video/song. As he dances around in the foreground, so much is happening in the back that it is hard to keep up with. So if you click here, you can see an breakdown of the concepts you’ve failed to notice. If you happen to realize that you missed a lot more than you expected…. well then the video did it’s job. While the camera and video is focused mainly on Childish Gambino, no one really notices what is going on in the back. Just like society, we are so caught with everything else that we miss the important issues that occur in our country. And on that note…. This is America.